“Successful and unsuccessful people do not vary greatly in their abilities. They vary in their desires to reach their potentials”

Join us in congratulating our alumnus Anton, class of 2017 for receiving two gold medals at Ontario Tech university, for graduating top of his class in Electrical Engineering. Anton first joined Bronte College in 2014. He came to Bronte from Russia, and ever since those early days, he has shown what hard work can achieve.

Soon after his arrival at Bronte College Anton went on to prove that he believed in excelling at everything he did. He became the President of the Prefect Council and was responsible for collaborating and leading more than 15 students and council members to delegate and complete assigned tasks. He kept his hands full planning and executing activities, such as Spirit Week, the Clothing Drive, the Food Drive, the Alzheimer’s Awareness Campaign, fundraising for the Salvation Army, and organizing stress relief activities for the student body. Anton was not only academically strong; he also was the Captain of the Soccer Team.

Fast forward to his years after graduating from Bronte, Anton went on to be offered a spot at Ontario Tech University where he has excelled in his Electrical Engineering program. 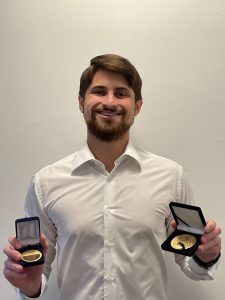 “I have worked as a remote paid contractor for a company out West and I was responsible for completing an individual innovative technology project for them. Bronte helped me prepare for university by expanding my technical vocabulary and preparing me for the university course load.”

We are so proud of all that you have achieved Anton!

To celebrate our graduates, Bronte has created an Alumni page on LinkedIn and we invite you to follow us and share your success!