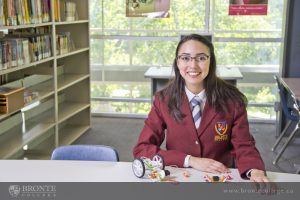 As a Grade 10 Bronte student, Isabela never would have guessed that she would become President of the Prefect Council, Prom Queen, and on her way to Queens University for Electrical Engineering. A lot has changed in 3 years for this superstar. Here’s what she had to say in her interview, just weeks before her graduation:

You’ve been here since Grade 10. That’s pretty young to be studying and living away from your parents, and in a foreign country! What made you choose Bronte?

Honestly, I mostly chose Bronte for its location – it’s so close to downtown Toronto. When I first got here, I was pretty scared; residence felt intimidating since it seemed like everyone had friends, and could relate to each other by speaking their own languages. It was tough at first – I thought, whoa, I’m going to live here for 3 years! But after the first month of school, everyone started to be friends. By Grade 11, I knew my way around the campus, had great friends to hang out with – I’m going to miss it so much!

What do you think you’re going to miss the most about Bronte?

My friends and teachers.  Also my room: it’s my space, and my home. It’s going to be hard to leave.

Speaking of teachers, do you have any memorable moments from a class, or teacher, that you’d like to share?

Yes! For me, my memorable moment is Math. I didn’t like math when I was in Grade 9. My teachers at home weren’t really engaging or encouraging. I came to Bronte and started to like it a lot, found it very interesting and realized that I’m very good at it! The same thing happened with science and computer science – I realized computer science was one of my favourite courses. Grade 11 Functions with Mr. Bangma was awesome – a turning point for me. He made the lessons fun; we dealt with real world problems to make it relevant.

That’s wonderful! Where do you see yourself working after your studies?

So you love Computer Science. Tell me a little about the Robotics club you were a part of?

We programmed an arm that basically grabs stuff! We bought a kit, built the arm – that took a while – almost 2 months, because we weren’t really sure how to do it. It involved a lot of trouble shooting and trial and error. Once we built it, we plugged it in, and programmed it through a USB – we used our computer programming skills to make it operate. It was awesome!

What’s the biggest change you’ve seen in yourself since living and studying at Bronte?

I’m more confident for sure. I never thought I was going to be Prefect President, Prom Queen, good at math, and have the friends I have. I’m sad to see my friends go. I also feel like I can just be myself. I wore a crown on my Birthday and nobody said anything because they know I’m a bit weird and quirky! I can be me.

Is there anything else you’d like to share? Are you passionate about a cause, or charity, or world issue?

Gender Inequality. It’s something I never thought of and I learned in my classes here. Women are often misrepresented, not given the same opportunities as men, and that needs to change. I would like to speak up and be that voice – I would also like to implement more science and math programs for women.

That’s a fantastic initiative you have about math and science programs for women. Given your path, you’ll be the perfect candidate to make positive change for women. To finish, I want to ask one last thing: what does success mean to you?

Knowing that when I go to bed at night I did everything that I could. I did my best, and there is nothing that I would have changed from the day.